The video game industry: A resource for organizers 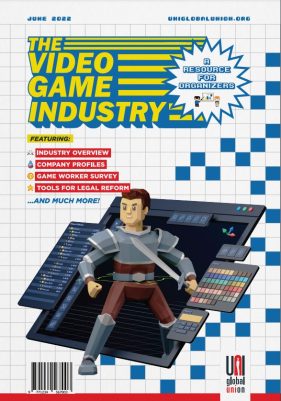 The video game sector is one of the fastest-growing entertainment industries, with revenue approaching half a trillion dollars globally by 2028 – exceeding projected revenue for the global film and video industry. Video game companies have become massive employers, with a workforce of more than 330,000 workers across North America, Europe, and Asia, including in emerging video game markets such as India.2 Video game workers have spoken out in recent years against working conditions in the industry, including low pay, insufficient benefits, rampant use of mandatory overtime or “crunch,” and workplace cultures rife with harassment and discrimination. Workers have also begun to form and join unions, including at Nexon and Smilegate in South Korea, Paradox Interactive in Sweden, Ubisoft studios in France, and, most recently, Activision Blizzard’s Raven Software in the U.S.

This report was commissioned by UNI Global Union to serve as a tool for workers and their unions to understand the landscape of the video game industry and the experience of game workers, as well as opportunities for legal and regulatory reform to improve workers’ working conditions and bargaining power