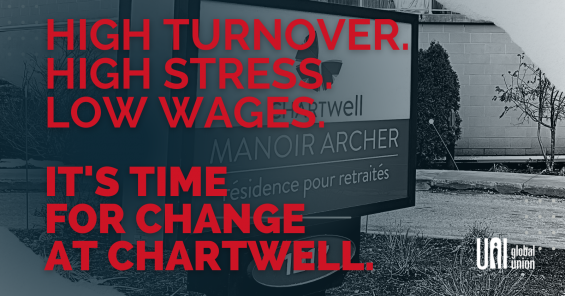 In an alert to shareholders issued today, UNIFOR, SEIU, Steelworkers and UNI Global Union issue recommendations ahead of Chartwell AGM

Nyon, Switzerland. 11 May 2022 —A coalition of unions representing the majority of Chartwell’s long-term care (LTC) staff is calling on investors in the Canadian nursing home giant to engage the company regarding several workplace risks—including staffing levels, wages and contracts, health and safety as well as freedom of association and collective bargaining—ahead of its 19 May annual general meeting of shareholders.

Canada’s long-term care sector has been particularly impacted by the pandemic, with more than 80 per cent of COVID-19 related deaths in long-term care homes, and Chartwell’s tragically high resident death rates from COVID-19 and long list of non-compliance with health regulations have put it at the centre of the crisis.

The coalition, comprised of SEIU Healthcare, UNIFOR, the United Steelworkers and UNI Global Union, issued an alert to investors today that puts a spotlight on workforce risks related to the company’s business model, such as:

A unionized workforce and collective bargaining play a key role in addressing these workforce risks. For example, a study published in leading health policy journal Health Affairs found that the presence of a trade union was associated with a 30 per cent lower mortality rate from COVID-19 among nursing home residents. However, Chartwell has historically been hostile to bargaining with trade unions representing workers in its operations.

“Chartwell’s business model is not sustainable for workers, who are worn out, overworked and underpaid,” said UNI Global Union General Secretary Christy Hoffman. “But it is also not sustainable for long-term investors who want to avoid a crisis like we have seen in other long-term care providers globally. Last year, investors made clear that business as usual is not an option at the company, and Chartwell must now demonstrate to all stakeholders that it is enacting change.”

This is the second year that the unions have called for investor action around the company’s handling of the pandemic. Last year, these unions raised their voice in support of shareholder resolutions that sent a strong signal for further board oversight and disclosures of how the company manages workforce related risks, receiving 31.37 per cent of votes cast.

The coalition’s investor alert contains recommendations for long-term investors to transform the company’s practices, including:

“We may be past the worst of the pandemic in long-term care, but many of the underlying issues that allowed the virus to blaze through Chartwell nursing homes are still there. Acute short staffing and poor working conditions are a chronic problem and have been for many, many years,” said Myles Sullivan, USW District 6 Director (Ontario and Atlantic provinces). “We hope that investors will join with other stakeholders in demanding change at the company.”

“Long-term care doesn’t have to be a high-turnover, high-risk industry. We have seen in country after country and company after company the difference a union can make in raising standards for workers and care quality for residents. It’s time Chartwell began listening to and negotiating with its workforce to improve the lives of employees and residents,” Andy Savela, Director of Health Care, UNIFOR.

“We represent the workers are who breaking their backs, coming home utterly exhausted, facing unsafe work for too little pay to raise a family of their own. We are asking investors to hold this company accountable for the deaths and the illness that happened in its homes. We are asking investors to act to make sure that something like this never happens again,” Sharleen Stewart, President, SEIU Healthcare.

English: Investor Alert: Chartwell and the Risks in Long-term Care

Unifor is Canada’s largest union in the private sector, representing 315,000 workers in every major area of the economy. The union advocates for all working people and their rights, fights for equality and social justice in Canada and abroad, and strives to create progressive change for a better future.

United Steelworkers union represents 225,000 members in nearly every economic sector across Canada and is the largest private-sector union in North America with 850,000 members in Canada, the United States and the Caribbean.