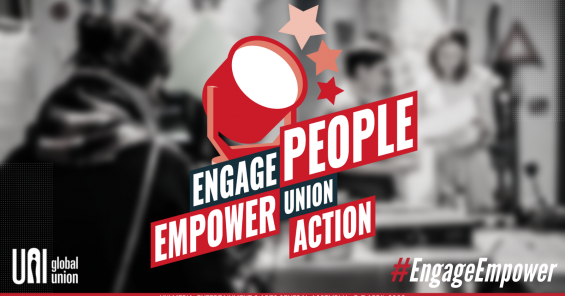 UNI Global Union affiliates in the Media, Entertainment & Arts sector (UNI MEI) commit to kick-start a culture change as they unite to tackle key issues in the sector over the next four years.

Some 150 representatives from unions and guilds in over 80 countries, gathered over three days for the UNI MEI Global online General Assembly from 5 to 7 April.

Participants endorsed a comprehensive sector programme aimed at enabling union to union cooperation to bring about a change of culture in the entertainment industries, in particular to:

“As a global union, we are coalescing around the key issues that matter to media, entertainment and arts workers more than ever before. We’ve turned a corner to real practical solutions and cooperation whether about equality in provisions of employment, safety or sustainable environment. We are all on the same page and our 140 member unions & guilds are making practical progress for workers across the industry and all regions. We are on the right course and we will continue to engage, to empower union action”

On the day when the conference tackled freedom from fear in the media, participants heard from Anatolii Yalovyi of UNI affiliate, the Cultural Workers Union of Ukraine. Media workers in Ukraine are  experiencing the most extreme form of fear and violence as war rages in his country.  He said:

“We are having a very hard time but we know that we are not alone. We are fighting for freedom, respect for human rights, tolerance and equal opportunities – shared values of the entire global trade union movement. That’s why we will win.”

Participants endorsed an solidarity statement on Ukraine and UNI MEI will work with the union to help relief and reconstruction efforts.

The Covid-19 pandemic has had a huge impact on unions and workers in the sector, initially grinding production to a halt and then requiring strict protocols to keep workers safe.

“Throughout the pandemic, media unions showed the indispensable role unions play in protecting workers. Your sector proved that unions can make the difference to provide dignity on the job, safe work and fair wages.”

Now, as the pressure to resume production and create content ramps up, particularly to keep pace with demands of streaming services, the problem of excessive working hours and impossible deadlines is taking its toll.

“Us campaigning together, through UNI, to curb long hours in the global entertainment industry, to engage with multinationals and grow collective bargaining coverage, is vital to achieve a just transformation post Covid19,” said BECTU’s (UK) Philippa Childs.

Kelly Wood from Australian affiliate MEAA, said there needed to be urgent action to address a skills gap that is compromising production and putting yet further pressure on workers to work even longer hours.

However, some workers, especially young workers, are not willing to accept these conditions:

“Work life balance and the possibility to work from home are more important than salaries to young workers in the media sector in Japan,” said Kiyomi Matsunami, from Japanese union, Nipporo.

Long working hours are also a form of violence, said Sonia Santana from Brazilian affiliate SINDCINE. A recent survey by UNI MEI in Latin America revealed the pernicious prevalence of violence and harassment in the sector with 89.4% of workers being victim. Participants were strongly encouraged to lobby their governments to ratify ILO Convention 190 to provide a framework to end violence and harassment in the world of work.

The meeting unanimously endorsed the six resolutions below.