Finland: Half of workers were called names or threatened 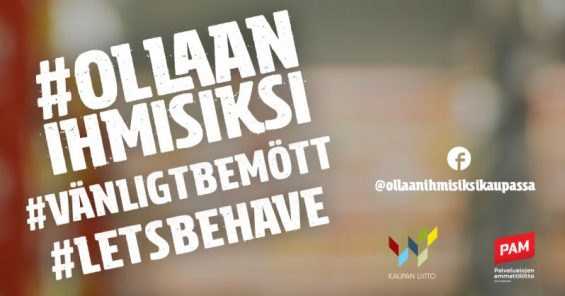 A survey conducted by PAM in 2020 with the participation of 374 PAM members employed in the service sector, including commerce, found:

· Half of respondents reported that they were called names or had received threats from customers in the previous year.

· 1 out of 10 workers experienced physical violence or threats with sharp objects, such as knife, in the previous year.

· 60% of those who experienced harassment did not report it to their supervisor because many thought it would not matter or make any difference.

· 1 in 5 respondents said they had changed sector or job because of harassment.

· Among other findings, the survey also revealed that some workers were trying to get used to harassment in order to survive in the sector.

Voices from the frontline: “Workers were provoked and filmed by unruly customers”

· According to the information provided by PAM’s working environment expert, Erika Kähärä, some customers visited small stores without masks and got as close as possible to retail workers and other customers. When workers warned them to follow the safety measures and to put a mask on, “Customers started videoing their reactions and gave them very provocative responses which usually made workers get angry. Then they posted these videos on social media and spread them around as evidence of overreacting.”

· “Suggestive comments delivered with a smirk. You generally get this from men in higher pay grades, who obviously think it’s their right.” (Sales assistant, PAM Survey, 2020). More information on the survey is available here: https://www.pam.fi/en/news/sexual-harassment-is-on-the-rise-say-pam-members-in-a-survey-comments-touching-and-lurid-images.html