Japan: Unreasonable complaints and harassment skyrocketed during the pandemic 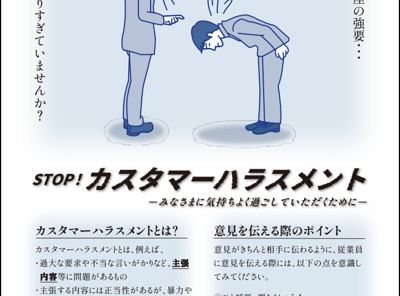 UA Zensen union has been campaigning against violence, harassment and unreasonable complaints from customers in Japan where the pandemic has worsened the situation, as the rest of the world.

According to surveys* conducted by UA Zensen with the participation of workers and customers:

· Workers attributed 35.9% of abusive customer behaviour to the impacts of the Covid-19 pandemic.

· Among the survey respondents, 15,526 retail workers reported that they were victims of unpleasant behaviour by the customers.

· More than 60% of respondents (including customers and workers) said that the number of nuisance (unreasonable) complaints against retail workers had increased.

· Almost one out of two customers (48.3%) reported that they personally witnessed malicious complaints – by customers against retail workers – and 95% of them had unpleasant feelings after witnessing the complaint.

· The retail sector ranked first in the list of sectors with the highest level of unreasonable complaints against workers by customers or service receivers.

Voices from the frontline: “Don’t touch that with your dirty hands!”

UA Zensen’s survey also helped to give a better understanding of what commerce workers had to go through during the pandemic. Here are some examples:

· A customer physically attacked a worker in a drug store because the because medicine they had purchased did not have the desired effect. The manager asked the worker to put up with it and keep working.

· When workers asked customers to wear a mask, many customers refused, and used abusive language against workers and pounded on desks and tills.

· When workers handled products at the cash register, they were yelled and even told “Don’t touch that with your dirty hands.”