KHMU brings international perspectives to its first ever policy conference 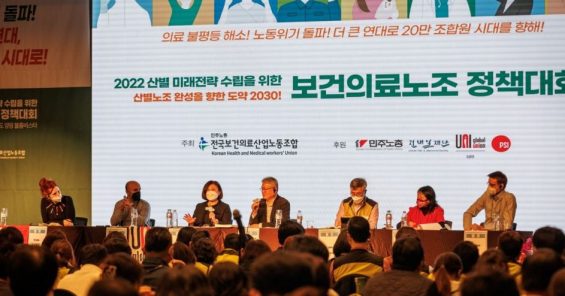 UNI affiliate the KHMU (Korea Health & Medical Workers Union) held its first ever policy conference this week in Yangpyong, outside of Seoul, to explore the connection between improving care policies and trade union growth.

The event kicked off on 29 November by highlighting best practices and solidarity from around the world. Speakers from the International Labour Orgaization, UNI Global Union and Public Services International (PSI) as well as representatives of German union ver.di, National Nurses United from the United States and Japan’s IROREN discussed the importance of cross-border cooperation and lessons learned from national union struggles.

The international seminar, attended by roughly 400 KHMU leaders, was followed by two days of discussion and planning around the KHMU’s ambitious plan to expand the union.

“Next year, our union will celebrate the 25th anniversary of being an industrial union. Are proud of what we have achieved, including a 14 day general strike and going to a five-day work week without wage reduction.”

Kwon Young-Gil, the first President of KCTU and Kang Eun-Mi, an elected official with the Justice Party, spoke of the power of unity and appreciated the positive effect of the KHMU’s policies such as its struggle against hospital privatization.

Jesse Wilderman, Senior Coordinator in UNI’s Care sector, presented how organizing and building power can address issues in care. He also explained the UNI-backed Investor Initiative for Responsible Care, which mobilized more than 130 investors with over US$4.4 trillion in assets under management to advocate for better quality of care—including lower patient/care worker ratios.

In the panel discussion moderated by Professor Kim Yong-Ik, former professor of Seoul National University and ex-Democratic Party lawmaker, the audience heard how ratio laws worked in Japan, the state of California and Germany. Prof. Kim noted that because of different insurance and medical systems, ratio laws cannot easily be transplanted from one country to another. However, the successes in these other places show the power unions can have in South Korea to influence the national and health policies in a way that benefits workers, patients and their families.

A safe staffing ratio is particularly important in South Korea—and will only become more pressing. The country is aging rapidly and has one of the world’s lowest birthrates. Sister Na also noted that this situation requires care workers to have appropriate training, which is why the KHMU plans to establish Union Education Institute for Care Workers. The union will use the centre to educate workers both better care practices but also about the difference a union makes.

Before the policy meeting started, the international speakers had a chance to visit Asan Medical Center and the National Assembly to meet lawmaker Chung Chun-Sook, a steadfast supporter of the KHMU from the Democratic Party.

Informed by the discussions in this meeting and empowered by the global solidarity, the KHMU will draft staffing ratio legislation, using best practices and scientific data, to submit to the government and employers’ association next year.

If the union proposal will not be accepted, KHMU will go on a general strike at the end of July. Sister Na is hopeful and said, “We will make a report of our struggle in the coming UNI World Congress in Philadelphia next August.”