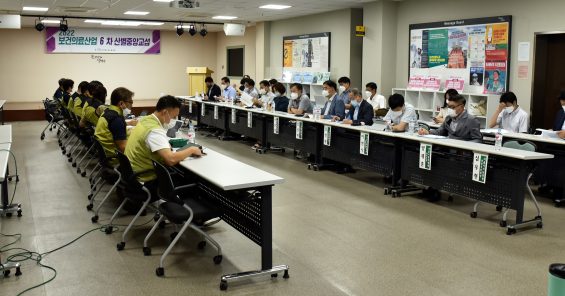 UNI Global Union’s affiliate, the Korean Health and Medical Workers Union (KHMU), is bargaining to improve pay, workplace safety, staffing and other conditions for more than one million care workers in the country. If sufficient progress at the negotiating table is not made in the coming weeks, workers will hold a general strike on 25 August.

This round of negotiations is the first time the union has sought a sector-wide agreement on “basic labour rights for every health worker,” including workers in small and medium sized hospitals who are not current members of the union.

Meeting with 76 care employers on a bi-weekly basis, the union says its goal is to “resolve inequality and social polarization, minimize blind spots in the basic labour standards, protect socially marginalized groups, narrow the gap in working conditions between workers in different positions and situations, and strengthen solidarity among workers.”

To build a more just and equitable Korean care sector the union has laid out clear demands:

· Implementation of the September 2 Agreement between Labour and Government, which secures compliance with the staffing standard during the Covid-19 pandemic, eradication of illegal medical practices and the overall execution of the five-day workweek

· Improvement of conditions, including: restricting night shift work to six times per month maximum, advancing a substitute nurse system, prohibiting shifts with only one person, paying a night-shift premium for nurses, enacting holiday pay, and converting contract job positions to permanent ones for jobs that require permanent patient services.

If negotiations, which began mid-May, continue stall, the KHMU’s branches will take coordinated action to apply for a “dispute settlement” and then call a general strike 25 August.

Rajendra Acharya, Regional Secretary of UNI Asia & Pacific, offered his support by saying, “Throughout the world, care workers have sacrificed and continue to struggle during the pandemic, and Korea is no different. The KHMU is simply asking for what is fair for these essential workers. They deserve decent jobs that are safe and pay a wage that allows workers to live with dignity. We call on employers to negotiate in good faith with the KHMU, and we will stand with these workers until they get the coll