Pandemic leads to global rise in violence in stores 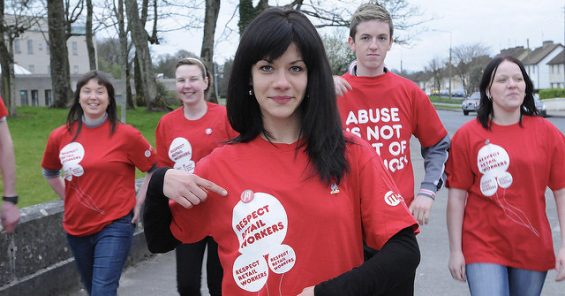 A new report from UNI Global Union shows that Covid-19 has triggered a pandemic of violence against retail workers around the world.

The report, which gathers evidence from trade union studies in over 20 countries, shows that while customer violence against retail workers was far from uncommon before the pandemic, it has since soared to alarming levels.

The extensive UNI Commerce report, which was supported by Union to Union, details how trade unions are responding to the rise in abuse, violence and harassment in retail, by pushing through new legislation, negotiating protective measures and campaigning to improve customer behaviour.

The studies show that retail workers are most at risk when asking customers to comply with Covid-19 restrictions such as mask wearing and social distancing. In the US, a retail worker was even shot dead for asking a customer to wear a mask.

A study by SDA union in Australia, found that one in five workers said they had been coughed on or spat during the pandemic, with 88 per cent of respondents to an SDA survey saying they had experienced verbal abuse from customers.

In the UK, violence from customers has doubled since the pandemic, with nine out ten retail workers reporting they had been victims of abuse.

In Japan, unreasonable complaints and harassment have surged, with workers attributing 36 per cent of abusive customer behaviour to the impacts of the pandemic.

Frequently, studies show that women commerce workers are most impacted by customer abuse, and also bear the brunt of sexual harassment. Some 56 per cent of surveyed retail workers in Finland reported experiencing sexual harassment from customers, while in Nigeria 58 per cent of women reported experiencing gender-based violence at work. However, more than a third said that when violations were reported, justice was rarely upheld.

“This report outlines that in every country, every region and every continent, violence against commerce workers is commonplace and it is rife,” said Head of UNI Commerce, Mathias Bolton. “But the report also shows unions are stepping up – through campaigns, through legislation and through collective agreements – to protect workers. At UNI Commerce we will do all we can to rid the sector of this scourge so that retail workers never have to accept violence as part of the job.”

UNI is calling on governments to Ratify ILO Convention 190 on the elimination of violence and harassment in the world of work, and to introduce and implement legislation which protects workers. UNI is also calling on retailers to:

For English versions of the report please see below.