Slovenian commerce workers are rising up for decent pay 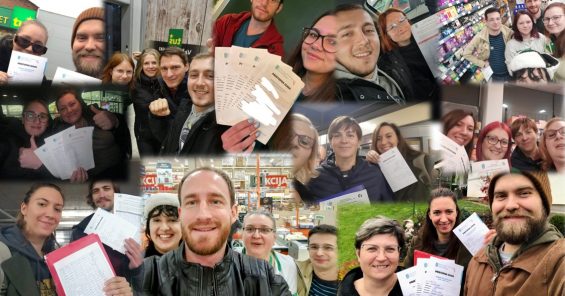 UNI’s new affiliate SDTS Union of Slovenia has increased the minimum basic salary by 36 per cent at sectoral level for more than 110,000 retail workers, secured better financial benefits and and won additional pay rises with the company level collective agreements.

“We congratulate SDTS and TUS Union on the strong campaigns they run and on the successful collective agreement they have secured through organizing and mobilizing workers” said Mathias Bolton, Head of UNI Commerce, “We will keep working with SDTS Union to achieve collective agreements in the multinational retailers in Slovenia.”

The path to victory traces back to 2020 when the Trade Union of  Workers in Commerce Sector (SDTS, a federation with many company-level affiliated unions) had run a successful campaign that concluded with a new legislation introducing work free Sundays for commerce workers.

Building on this campaign, SDTS has mobilized thousands of commerce workers during the re-negotiation of the sector level collective agreement for commerce in 2022. An online petition with the key demands was signed by more than 7,100 workers, a press conference and some actions were also taken to inform public and show workers’ determination to win a fair pay rise.

After several months and many rounds of negotiations, an agreement was reached in late November that increased the minimum gross basic salary for commerce workers by 36 per cent from 697.6 Euro to 950 Euro. The basic salary is still lower than the official minimum wage in Slovenia (1,074 Euro) which is already paid to all workers including retail workers.

Nevertheless, the increase in the minimum basic salary for retail will reflect on some financial benefits that are based on the sectoral minimum salary and push the wages up in the sector as well. With the new sector level agreement, the lunch pay was also increased from 4.63 Euro to 6.15 Euro and the holiday and transportation pays was also updated.

Trade unions affiliated with SDTS are also negotiating company-level agreements including Sindicat TUS that represents workers employed by TUS which is one of the biggest food retail chains in Slovenia. Using the renegotiation of the agreement for TUS to organize and mobilize workers, in collaboration with SDTS and the CEDRA Organisation, the Union visited more than 100 TUS stores, run a petition to engage with workers, organized 370 new members in the stores, recruited members in the warehouse for the first time, set a collective agreement committee in which workers’ representatives were also represented, and organized massive protests with the participation of hundreds of workers.

While the union was getting ready to call a strike on 23 December 2022 with a petition supporting the strike signed by around 1,500 workers from over 130 stores, an agreement was reached for around 2,800 TUS workers. The minimum salary for the company was increased from 950 Euro to 1,060 Euro, the relocation of workers among the stores was limited with a periphery of 50 kilometres from workers’ place of residence and it was also agreed that every minute spent at work (staff meetings, trainings, preparation and after-shift work etc.) will be counted as working time and remunerated accordingly among others.