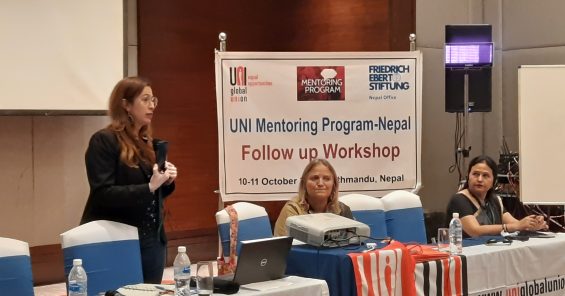 In the program experienced women mentor young women willing to participate in union activities by sharing their experiences. The tandems are selected from the same-city-union to make it easier for them to communicate with each other, encouraging stronger & active participation from women members in the unions. The program supports women and trade unions by increasing women leadership and active participation to include issues faced by women through collective bargaining.

The workshop held on 10th-11th October focused on issues women face such as (1) Low access to resources (2) Unpaid care work and domestic duties (3) Gender based violence at workplace (4) discrimination in family, society, workplace, (5) 3 M-Menstruation-Maternity-Menopause (6) Media portrayal of women`s body as a commodity (7) Gender Pay Gap. Some of the challenges mentioned by the participants during the program were: lack of trust in a woman`s abilities,  gender pay gap, lack of flexibility in the timings, patriarchal mindsets, lack of safety leading to women not being to be able to travel  for work, negative image of trade unions, difficulties in convincing male colleagues in the unions, lack of dignity to self-employed women, /informal workers, no labour laws to cover informal workers.

Through the mentoring program participants were able to gain: self-confidence, newer ideas of working together, women`s representation substantially strengthened, women were able to participate in CBA negotiations, participants led campaigns/workshops on ratification of C190, in many places committee on Sexual Harassment at workplace was formed.

“The UNI Mentoring Program is not only for us but an opportunity for our unions to expand and strengthen, to help organize and grow” – Kamala Neupane, UNI NLC Women President

“Solidarity support among women and creating sisterhood is very important.  This is not a program against men, it is against the system which builds discrimination, which makes us think that discrimination is natural. The goal of this program is to strengthen our affiliates with strong women taking active parts and positions in the union”. Anjali Bedekar, Director, UNI Asia & Pacific Equal Opportunity & Women Activities

The UNI Mentoring Program created by UNI Equal Opportunities as part of the That’s Why campaign, to inspire and empower more women to join the trade union movement. This new workshop increases the number of women taking part in mentoring to over 1,200 women in 56 countries around the world.