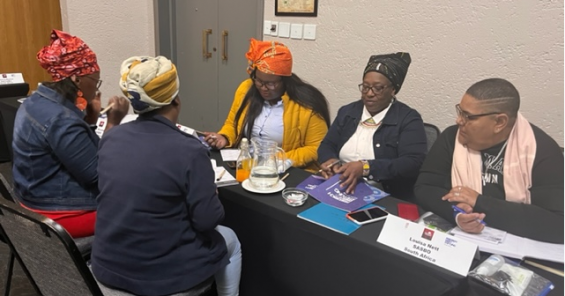 Last month in Johannesburg, UNI Global Union Equal Opportunities deepened its work to build women leaders in Southern Africa by holding a workshop of its mentoring programme. The workshop, organized with the support of the Friedrich Ebert Stiftung Foundation, is part of UNI’s mentoring programme for Southern Africa – one of three ongoing in the region, that benefit participants in 15 countries in the region.

Participants from South African unions SASBO and SACCAWU joined in this two-day workshop on the 22 and 23 of August, to share best practices and to highlight the work they have been doing to support gender equality at work.

“Gender issues are a priority for unions. They should be included in negotiations and collective agreements, and at the heart of our work. Only then can we reach equality,” said Patricia Nyman, UNI World Women’s President and UNI Africa Women’s President.

“This programme empowers women,”said Head of UNI Equal Opportunities Veronica Fernandez Mendez. “Not only does it provide women with the skills and tools to succeed in trade union work; it also builds the self-confidence to overcome the ‘impostor syndrome’ which sometimes hampers womens’ rise to decision making positions.”

“Without people believing in me, I would never have been able to overcome my own insecurities and succeed in my goals” added Lebogang Selepe from SASBO.

With the creation of new tandems of mentors and mentees, women in trade unions across South Africa are building support networks to reinforce not only their presence in trade unions, but to ensure that gender issues are adequately included in the work of trade unions, from discussions and negotiations, to workplace policies and collective agreements.

The global programme, launched nearly a decade ago, is designed to elevate women in the trade union movement all over the world, helping build the necessary needed to succeed in decision-making positions within the labour movement.