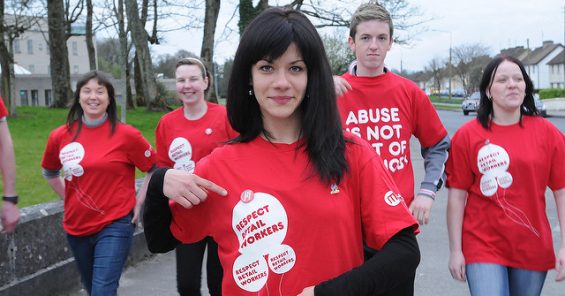 Thanks to the dedicated “Freedom from Fear Campaign”48 run by USDAW for several years, considerable progress has already been achieved and more is on the way:

· A new law protecting Scottish retail workers from violence, abuse and harassment was adopted in the Scottish Parliament in January 202149. The Bill increases protections for retail workers by:

a. Creating a new statutory offence of assaulting, threatening, abusing, obstructing, or hindering a retail worker,

· USDAW collected more than 100,000 signatures to trigger a debate in the UK parliament on violence against retail workers, which took place on 7 June 2021.

· The UK government committed to ratify ILO Convention190 on Violence and Harassment.

· USDAW continues to push for the introduction of a better legislation and has been successful in progressing amendments to the Police, Crime Sentencing and Courts Bill to include protections for shopworkers.

UA Zensen’s campaign against unreasonable complaints and harassment in the commerce sector not only raises public awareness but also helps to secure better legislation, guidelines and recognition for the commerce workers.

· On 3rd December 2020, UA ZENSEN held a landmark event on violence and harassment with 200 participants including over 80 Diet (Japanese parliament) members. In the meeting, the Japanese government committed to allocate a budget of 17 million Japanese Yen (approx. US$160,000) to develop specific guidelines and measures to prevent harassment by customers and to raise awareness.

· In the Japanese parliament, the Prime Minister at the time acknowledged the harassment retail workers face and committed to work on the issue.

· The Japanese Ministry of Health, Labour and Welfare has issued guidelines that focus on customer harassment.

Launched in December 2017, SDA’s “No One Deserves a Serve” campaign has led to the abuse of retail and fast-food workers being recognized as a serious problem that requires greater action and better measures and legislation for the protection of workers.

· Nationwide advertising campaign calling out abusive and violent customers including two retail and one fast food TV ads and advertising on radio and billboards.

· SDA briefing federal and state members of parliament and senators about the issue.

· Working with individual employers on their specific policies and training.

· All Major employers signing on to SDA Industry Statement calling for zero tolerance to abuse and violence.

· Coughing and spitting fines in New South Wales, Queensland, and the Northern Territory. Fines and/or prison terms (up to 12 months) for abusing/assaulting commerce workers or Pharmacy shop assistants in Western Australia and South Australia.

· Campaign endorsed by MPs and senators across Australia.

· Research and a world first trial of preventative measures using retail and fast-food stores in partnership with a government safety agency and Griffith University.

· The campaign videos have been viewed hundreds of thousands times on social media53, become viral and played a key role in awareness raising.

· PAM negotiated a specific paragraph into the sector level collective agreement which obliges retail employers to assess risks related to abuse and harassment and take necessary actions to protect workers.

· PAM and the Finish Commerce Federation issued a guideline on tackling harassment in the commerce sector which entitles workers with right to refuse service to the customers who insist on acting inappropriately.

Swedish unions, Unionen and Handels, have been effectively using collective bargaining to prevent violence and harassment at work with a specific focus on sexual harassment.

· A working group (composed of union and employer representatives) focusing on prevention of sexual harassment by the third parties has been established.

· Risk assessment and prevention of harassment have been mainstreamed into occupational health and safety.

· New legislation was introduced in March 2021 which regulates that a person over the age of 15 can be banned from accessing a store if there is a risk they will commit a crime or harass someone in the store. The access ban applies for a maximum one year but can be extended.

Thanks to the “Close at 19:00” campaign launched by the Alliance of Commerce Workers of Chile (ATCOMER), the Chilean Senate Labour Committee approved a bill that aims to promote decent work and worker safety in the commerce sector by closing stores at 7 pm. The legislation is still in progress.

Following months of negotiations, many collective actions and strikes, Sinathit union in Peru concluded a ground-breaking collective agreement at Tottus, a major retailer in the country. In addition to a good pay rise and better financial benefits, Sinathit won better health and safety conditions for workers and got a committee established for the protection of workers against sexual harassment.

After many actions and a strike, the Chanel Korea Workers Union concluded a new collective agreement and won improvements in rights and pay for workers, including better preventive measures against sexual harassment in stores.56 The union is also pushing for remediation for the workers who were sexually harassed by a manager.