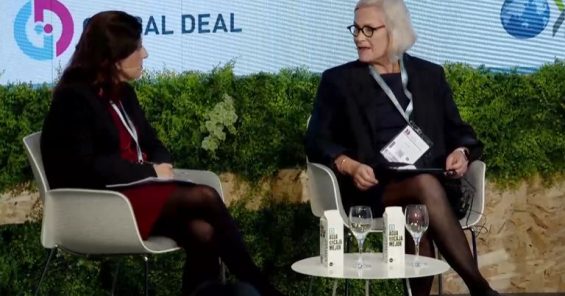 At a high-level panel at the Global Deal Forum titled “Managing telework in a post-pandemic world of work: the role of social dialogue,” UNI General Secretary Christy Hoffman laid out the clear need for expanded collective bargaining, improved social dialogue and stronger employment law to adapt to the new reality of remote work.

Hoffman noted that all work-from-home arrangements are not the same. For example, some employees can work from home flexibly in relative comfort, with adequate space, ergonomic furniture and stable internet. But others might be remote full time, in the call centre industry for example, with low wage, precarious jobs that have little support in countries like Colombia and the Philippines.

“Where there are unions and collective bargaining, we’ve seen progress for all types of remote workers, but there are serious problems remaining, particularly for those who do not have a union, which is the majority,” she said.

She announced that next week, UNI will release an analysis of data from nearly 120 collective agreements dealing with remote work from 25 countries. The report shows a robust response from unions around the world to the explosion of telework during the pandemic. Several issues, like the right to disconnect, are becoming more-and-more common while others, such as domestic violence and surveillance, are emerging areas for trade union negotiations.

“There are questions about how we address the right to disconnect, how to employers ensure a safe remote workspace, what is the impact of surveillance on workers’ psychosocial health and who controls worker data collected by cameras and algorithms. These are in addition to addressing gender equity and make sure young workers get the mentorship they need,” Hoffman said.

“We need global solutions for these issues. Regulation, freedom of association and social dialogue are necessary to answer these questions about what the new world of work looks like.”

Hoffman’s point was supported by several of the other panellists, including Noureddine Tabboubi, General Secretary of the Tunisian General Labour Union (UGTT). He talked at length about the union’s role in social dialogue producing a more just outcome for remote workers in his country. Additionally, Cecilia Boned, Country Head from BNP Paribas Spain, told the panel about the bank’s work with the European Works Council and unions to implement remote work as part of a broader digital transition.

In addition to the forum the Global Deal has released a flagship report on social dialogue available here: https://flagship-report.theglobaldeal.com/.