Asia-Pacific women call for more diversity and inclusion in broadcasting 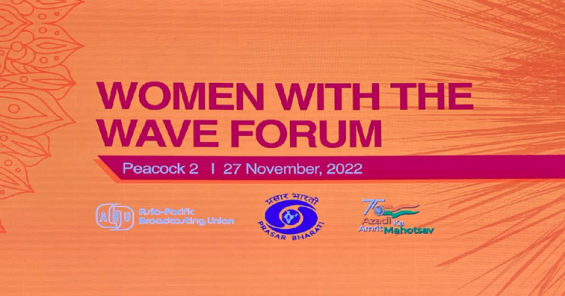 Women involved in broadcasting from across Asia-Pacific called for greater portrayal of diversity and disability on screen at a regional forum held in New Delhi on 27 November. Inclusive stories resonate with audiences, raise awareness and can lead to positive changes in societies, they argued.

The Forum entitled “Broadcasting for all: Diversity and Inclusion in the media” was held by the Asia-Pacific Broadcasting Union, which is the world’s largest professional association of broadcasters.

Speaking at the forum, Hanna Harvima from UNI Global Union Media, Entertainment & Arts (UNI MEI), told how UNI has made gender equality and diversity a strategic priority for the sector. This includes a new campaign focusing on gender equality through collective bargaining, and supporting unions to achieve it.

UNI is also involved in specific European projects aimed at establishing equal pay and equal careers, as well as diversity and inclusion in broadcasting. In Latin America, a UNI MEI survey put the spotlight on the prevalence of violence and harassment in the audiovisual sector, which chronicled abuse suffered by LGBTI workers for the first time.

Harvima further explained how UNI MEI affiliates have supported their members through the global health crisis, providing information and resources regarding mental health, and assisting women who faced domestic violence during the confinement.

The Forum also looked at the situation of gender equality in broadcasting organizations and in their programming, touching on key challenges such as increasing representation of women in decision-making roles, and the impact of traditional gender roles on women’s careers.

In some countries gender equality has improved significantly in recent years, and some broadcasters can boast equality for women. However, too often management structures are overwhelmingly male. Many broadcasters have joined the BBC’s 50-50 Equality Project, which aims to inspire and support the BBC and organizations around the globe to “consistently create journalism and media content that fairly represents our world”.