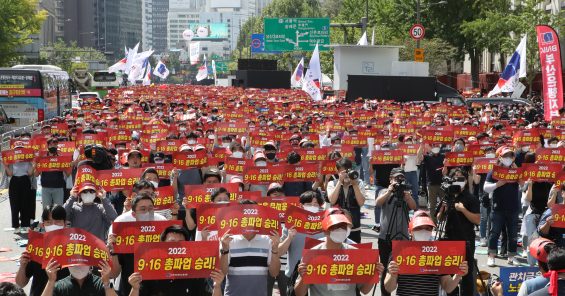 On October 7th, World Day for Decent Work, UNI Global Union is standing with workers on every continent who are demanding wage justice amidst a cost-of-living crisis.

According to the ITUC, more than half of households worldwide are struggling to get by and 10 per cent cannot meet the cost of essentials. Millions are going hungry, enduring lack-of-heating, facing homelessness or rationing medicines. Millions more face the stress and uncertainty of economic precarity.

This crisis has pushed workers to the brink and into action.

“This inflation is not driven by wages. In fact, the reverse is true. In country after country—North and South—our wages are not keeping up with inflation. Real wages are in decline.

“The truth is that corporate profiteering plays a big role in these rising prices. Studies from all continents, and even the European Central Bank, link inflation to increased profits—not our wages. In fact, many companies—and especially those in food and energy—are enjoying windfall profits.

“And second, let’s not buy the technical argument that inflation can only be tamed by raising interest rates, reducing government spending and increasing unemployment. This is an attempt to engineer a recession in order to curb our bargaining power and give cover to corporate interests who want to roll back any gains.

“After decades of flat wages and a falling labour share, it’s time to reverse that trend. Let’s demand wage justice today and every day.”

Unions around the world are doing just that.

In the United Kingdom, over 170,000 CWU postal and telecoms members have taken strike actions for fair wages. Thousands of Telmex workers walked off the job this summer for higher wage and respect for their collective agreement. In Germany, ver.di Amazon warehouse workers put down their scanners and parcels in protest of low salaries.

“If Amazon makes Prime membership 28 per cent more expensive and justifies this with rising costs, then we have these rising costs too and want compensation for it,” one over.di representative said.

And workers are winning.

More than 20,000 Korean finance workers also went on strike—and won a significant pay rise. After weeks of mobilization, unions in Spain are at the bargaining table with Correos, the national postal service. Years of struggle helped push H&M in Peru to negotiate a first collective agreement with workers that includes a backdated pay rise. Over 2,000 long-term care workers, members of SEIU Healthcare Pennsylvania in the United States, gained a raise after the longest nursing home strike in the union’s history.

However, as staggering statistics about growing inequality show, more must be done.

“Our governments should be taxing the rich, controlling prices and investing in public services. We need real collective bargaining and a new social contract so that we can rise together,” Hoffman concluded.

🪧Workers are demanding #WageJustice to combat the #CostOfLivingCrisis.